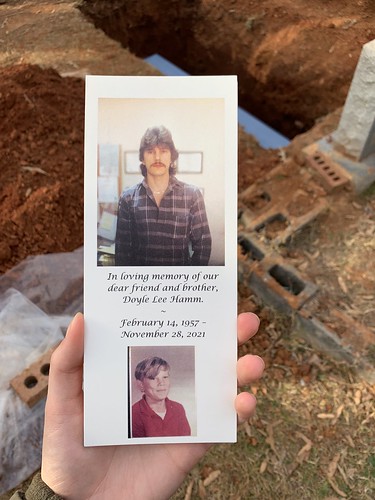 At his burial beside his grave, Doyle was remembered by his younger brother Danny, his grandniece Dwan, and the many men and women who loved and supported him during his more than three decades on Alabama’s death row, especially the men from the Kairos prison ministry who visited Doyle monthly on death row since the early 1990s, two of whom waited for him at the gallows on the night of February 22, 2018.

It was a peaceful and restful moment that remembered Doyle’s spirit, mercy, and friendship, which touched so deeply so many people, especially his friends on death row, those still alive today and the many who were executed by the state of Alabama over the past decades.

Farewell Doyle, you have been through countless ordeals, may you now rest in peace.

The U.S. Court of Appeals for the 11th Circuit in Atlanta has appointed Professor Bernard E. Harcourt to represent an Alabama inmate who has been on death row for 26 years. Doyle Hamm is appealing the denial of his federal habeas corpus petition by the U.S. District Court for the Northern District of Alabama in Birmingham.

“This is a classic case—typical in the capital punishment context—where a death row inmate sits for decades awaiting death and the courts never get to the merits of his case, always instead fighting over procedural technicalities,” Harcourt said. “If the federal court in Birmingham had gone straight to the merits of Hamm’s case, justice would move a lot faster and the process would have a lot more legitimacy.”

Petition for Writ of Certiorari

Appendix to the Petition for Writ of Certiorari

State of Alabama's Brief in Opposition

State of Alabama's Motion to Set an Execution Date

Doyle Lee Hamm's Motion for Enlargement of Time to Respond

Case in the News

"When Prosecutors Write Opinions That Judges Sign Off On" (Brennan Center for Justice, November 13, 2014)